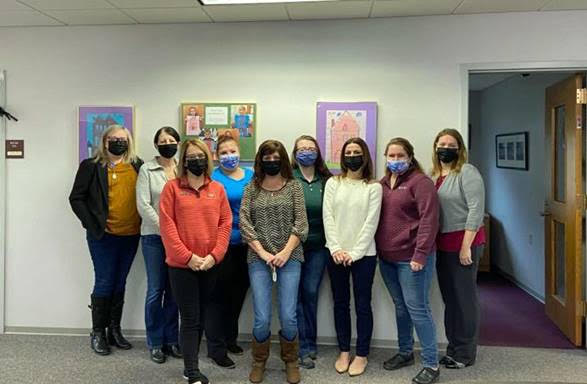 JAY – On October 21, 2021, credit unions around the world celebrated the 73rd anniversary of International Credit Union Day. This year, OTIS Federal Credit Union employees have chosen to commemorate this unique holiday with a week-long random acts of kindness campaign.

Armed with a budget of $ 2,000, a committee of nine staff toured various establishments across OTIS FCU’s membership scope – from Rangeley to Turner and points in between – and surprised individuals and organizations with groceries, gasoline, meals, baked goods, fuel assistance. , donations and more. Each employee was allowed to spend the funds allocated to them at their discretion while covering their respective geographic area.

â€œThe school secretaries accepted the pastries with so much appreciation and thanks,â€ commented Nichols. â€œIt was great to give back to the community. Nichols and Castonguay also bought groceries and gasoline for various people in Hannaford in Jay, Food City in Livermore Falls and CN Brown in Livermore Falls.

Brenda Bryant, cashier / backup supervisor and Courtney Nightingale, cashier; spreading kindness in the Turner / Livermore / Jay areas, paying for a meal at Terry & Maxine’s in Turner, then stopping by Greenwood Orchards in Turner to purchase a number of pies, breads, cookies and gallons of cider. From there, Bryant and Nightingale surprised staff at the Livermore City Office, Turner Fire Department, and Turner Vet Clinic with the various goodies. The couple ended the day by shopping for groceries for a woman in Hannaford at Jay and paying for gasoline for a woman at Jay Diesel and Gas.

Collections / Payment Specialist Kimberly Couture has covered the Jay / Wilton / Farmington regions. Couture was accompanied by her husband Joseph M. Couture II, a long-time member of OTIS. After shopping for groceries in Hannaford, the Couture made surprise deliveries to the Wilton Area Food Pantry and the Care and Share Food Closet in Farmington. The two then stopped by Dunkin ‘Donuts in Farmington, purchasing a Box O’ Joe, donuts and muffins which they then delivered to the Franklin County Sheriff’s Department.

Carrie Judd, cashier supervisor; and Jannell Pomeroy, cashier; spread kindness in the communities of Hartford and Canton. After collecting four boxes of baked goods at Berry Fruit Farm in Livermore Falls, Judd and Pomeroy made surprise deliveries to Hartford Elementary School, linemen working in the rain in Canton, Pinnacle Rehabilitation Center in Canton and Canton employees. Variety. The two also surprised various people across the region by paying for gas and groceries.

Kim Turner, President / CEO, has covered the New Vineyard / Carrabassett Valley / Kingfield areas, doing surprise grocery shopping at Mountainside Grocers and Ayotte’s Country Store in Carrabassett Valley. At our village market in New Vineyard, she paid for a gentleman’s food order online, along with all outstanding food orders. At Irving’s in Kingfield, Turner filled an unsuspecting woman’s gas tank. “[But] the RAK that completely made my afternoon, â€said Turner, stopped at Dead River in Kingfield and anonymously paid $ 100 for the fuel bill of a local mother of three young children who is currently struggling with the Cancer. “There are no words to explain how touched I was [to be able to do this]. “

Sarah Hayes, Director of Marketing and Communications, covered the Phillips / Rangeley regions. Hayes has chosen to donate a check for $ 100 to the Rangeley Friends of the Arts CASA (Creative After School Arts) program, hosted at the Lakeside Theater in Rangeley. The program is free to students in grades 5 to 12 interested in the performing arts and is fully funded by grants and private donations. CASA offers musical instrument lessons to its participants, as well as workshops on performance and theatrical operations, music and performance, graphic arts, fine arts and design, digital media, writing creative and community service. Hayes spent the rest of his funds to surprise buyers at Rangeley IGA and Edmunds Market in Phillips.

Hayes said of the initiative: â€œThis is the second International Credit Union Day that OTIS has commemorated with a week-long random acts of kindness campaign, and we are delighted to have more than doubled the number of participants here at the credit union. . The past year and a half has been difficult and trying for so many – we couldn’t think of a more appropriate time than now to join the community and spread some love and kindness. At OTIS and every other credit union around the world, â€œpeople help peopleâ€ is what we do every day – it’s our â€œwhyâ€, our reason for being. With our RAK campaign, we wanted to go further in this support and really demonstrate to those who live in our membership area what it is to be part of a community of credit unions. Turner added, â€œInternational Credit Union Day is a great time to reflect on the mission of credit unions around the world and to be part of a movement that not only aims to help consumers be financially savvy, but who has a deep concern for the success of the communities in which credit unions exist and serve. Being in the communities we serve, providing random acts of kindness, especially on International Credit Union Day, it was a win-win situation for everyone.